Cryptovot
Home Coins Ethereum Leaked Report Allegedly Shows How Much Twitter Influencers are Getting Paid to... 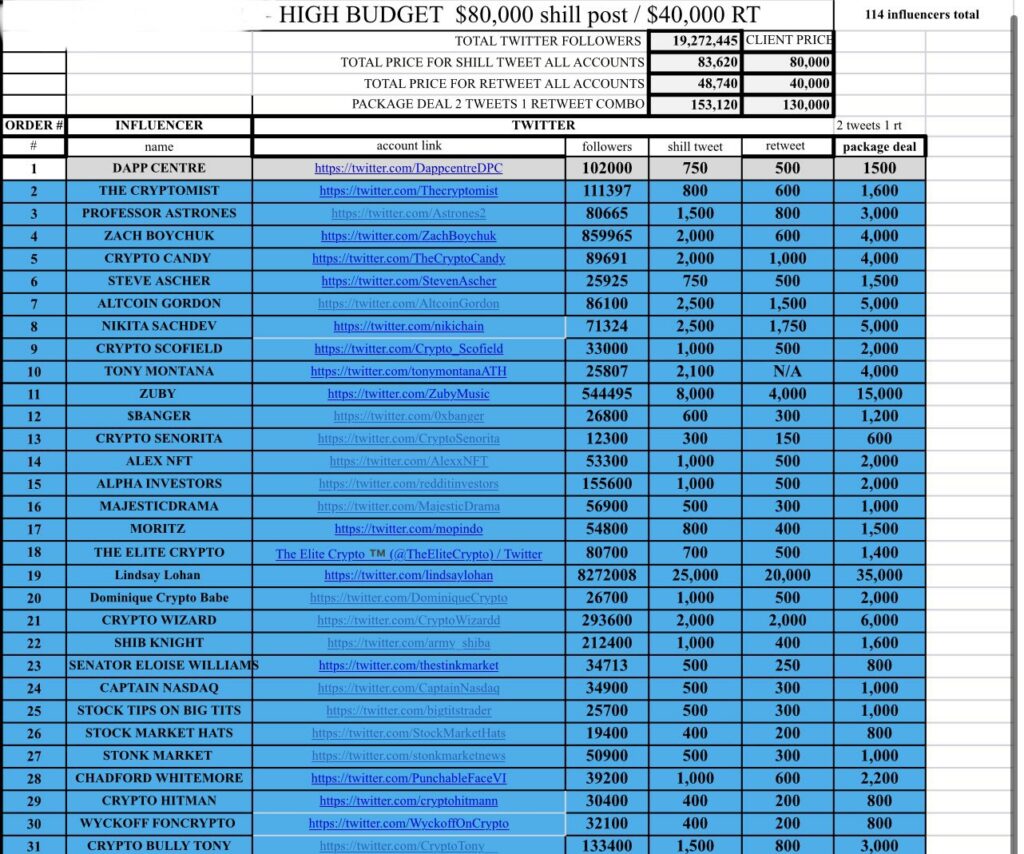 A three-page spreadsheet allegedly breaking down the amount in dollars paid to numerous Twitter influencers to shill crypto projects has been leaked on the social media platform. Crypto-Twitter community member @zachxbt is at the helm of the alleged leak with a caption that states ‘New influencer shill price list leak’.

Crypto Influencers With a Higher Following Get Paid More

The leaked list, which can be found below, tabulates 115 Crypto influencers on Twitter and how much it costs to have each shill a project. Additionally, the leaked list seems to be from a crypto project with a budget of $120,000: $80k for a shill tweet and $40k for a retweet.

From the list, it can be observed that crypto influencers with a higher following get paid more to shill a Tweet and retweet. For example, one Twitter influencer with 8.272 million followers gets paid $25,000 to shill one Tweet and $20,000 to retweet.

What Exactly is Crypto Shilling

Crypto shilling refers to the advertising of a project at a cost by a person of status or reputation, with a goal to popularize or hype it and to have others invest or buy into the project. Shilling is usually done on the popular social media platforms of Twitter, Instagram, Facebook, Youtube, Telegram, and WeChat, just to name a few.

More often than not, a potential investor with enough experience can identify the legitimacy of a shill from a known crypto influencer. For example, anyone who survived the 2017 to 2018 ICO boom can easily spot a potential rug pull based on their experience of being rug pulled back then.

However, the landscape of crypto shilling has evolved as the industry adopts IEOs, IDOs, and NFT mint campaigns. Consequently, spotting a potential rug-pull or scam becomes more difficult. Still, the following can help in avoiding becoming a victim of one.

Doing Your Own Research (DYOR) is also recommended before committing any funds to a crypto project. Also, participating in a crowdfunding effort through a trusted exchange such as Binance or FTX is highly recommended. Such platforms have a reputation to uphold and have done their due diligence on all crypto projects they promote.

Bitcoin And Ethereum Are Not Currencies

Galaxy Capital’s Mike Novogratz Warns that Finding Crypto Bottoms is Dangerous, Altcoins Could Dump by Another 70%