Catch the latest episodes of CoinDesk TV for insightful interviews with crypto industry leaders and analysis.

Bitcoin and ether, the two largest cryptocurrencies by market capitalization, were afterthoughts on Wednesday as a handful of alternative coins turned heads in digital-asset markets.

The day’s big story was Crypto.com’s CRO token, which shot up some 26% to a new all-time high after the crypto exchange and credit-card issuer announced a naming-rights deal with the Staples Center in California, home of the Los Angeles Lakers pro basketball team. The token was a standout performer in mid-2020 but had not attracted much notice since then.

Avalanche, a smart-contracts blockchain set up to compete against Ethereum, was another winner as its AVAX token surged to a record high after a new partnership with accounting giant Deloitte was announced. Crypto analysts said the network has benefited from more than $600 million in incentives and development fund awards announced in the past few months.

What about dog tokens dogecoin and shiba inu coin? Well, they’re hanging their heads these days, well off the all-time highs reached earlier in the year, with even seemingly positive news these days doing little to perk up the ears. Bloomberg Intelligence analyst Mike McGlone wrote Wednesday in a report that the memecoins might be ready for “purging, so as to move on with the adoption process of crypto assets in investment portfolios.”

In traditional markets, stocks fell as some traders worried that the fast inflation increase might push the U.S. Federal Reserve to tighten monetary policy sooner than previously expected, even as oil slid to a six-week low around $78 a barrel.

An accelerated response by the Fed to withdraw monetary stimulus might curb bitcoin’s appeal as an inflation hedge while also crimping the momentum for high-risk, high-return assets.

“Bitcoin’s long-term outlook remains bullish, but the waters over the next few months will be rough as institutional investors look to see if the Fed will be forced to raise rates sooner and trigger a broad-based selloff of risky assets,” Edward Moya, senior markets analyst for the foreign-exchange broker Oanda, wrote Wednesday.

Bitcoin Holding Support at $60K; Could Face Resistance at $63K-$65K 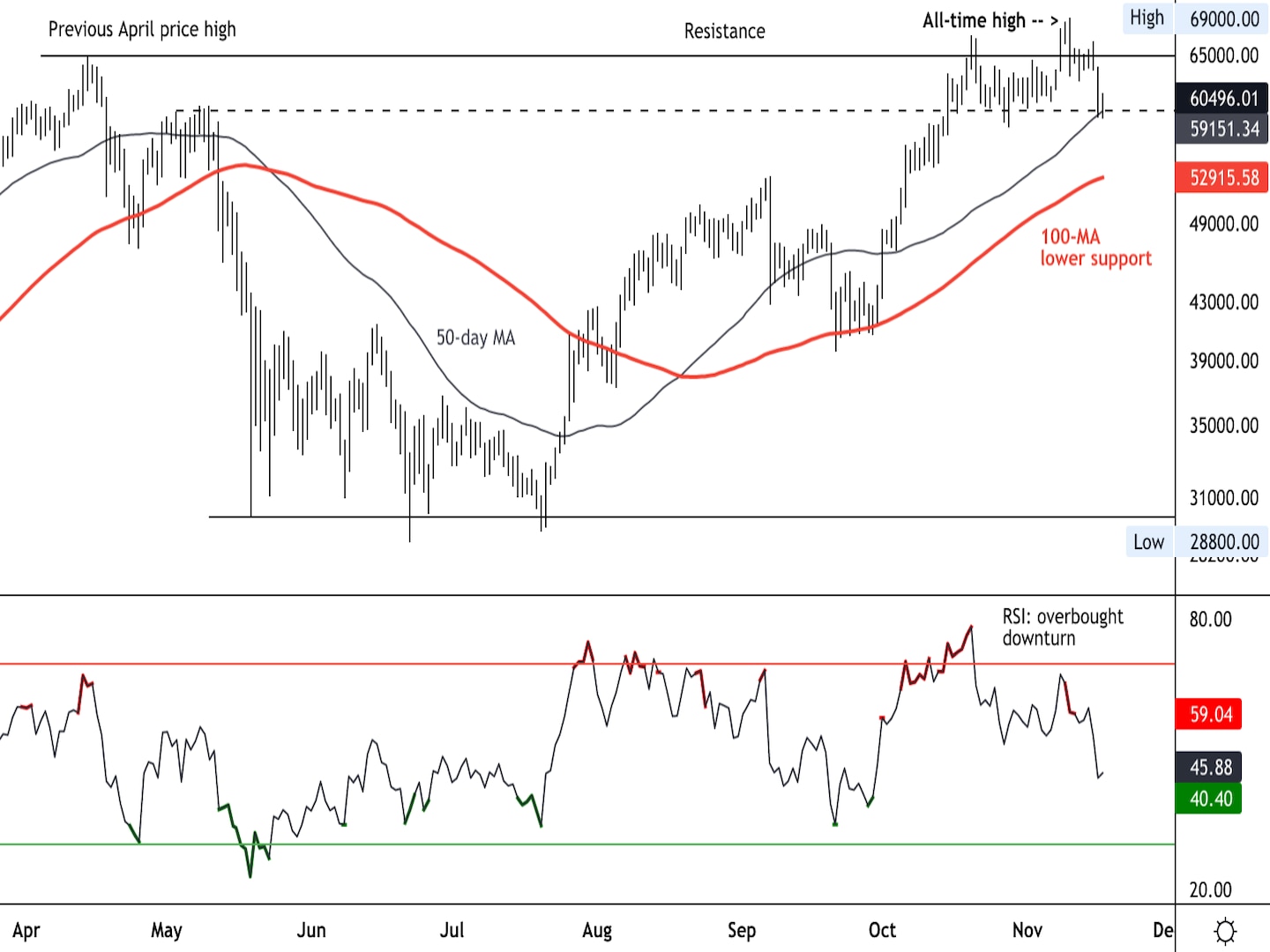 The cryptocurrency is roughly flat over the past 24 hours and could see further upside toward the $63,000-$65,000 resistance zone.

Both the 50-day and 100-day moving averages are sloping upward, indicating a positive intermediate-term trend. This means buyers could remain active on pullbacks given strong price support above $53,000.

For now, the relative strength index (RSI) on the daily chart is below a neutral reading of 50, which means a period of consolidation could continue until a decisive breakout or breakdown is confirmed.

In case you missed it, here are the most recent episodes of “First Mover” on CoinDesk TV:

India to Ban Crypto as Payment Method, but Regulate as Asset: Report

The Top Universities for Blockchain by CoinDesk 2021

The Future of Wealth Management Is Non-Custodial