Digital Currency Group, a crypto-industry holding company, came out in defense of its subsidiary Grayscale’s Grayscale Bitcoin Trust (GBTC) last week, when the fund’s shares traded on Monday at a 20.53% discount to its underlying bitcoin holdings – the steepest in five months.

One perspective is that Digital Currency Group’s pledge to buy as much as $1 billion of GBTC shares might represented savvy, opportunistic timing. Another is that the parent company’s announcement was needed as a demonstration of support for the $39.45 billion GBTC, the world’s largest bitcoin fund.

The plot thickened when Grayscale officially filed with the U.S. Securities and Exchange Commission to convert the trust into a spot-based exchange-traded fund (ETF), even though SEC Chair Gary Gensler has signaled his preference for a futures-based ETF. (Several of those have recently won approval.)

On the heels of the developments, the GBTC discount has since narrowed to about 16%, based on data from the crypto derivatives research firm Skew.

Bloomberg commodities analyst Mike McGlone wrote last week that the U.S. Securities and Exchange Commission’s (SEC) recent approval of futures-based bitcoin exchange traded funds (ETFs) might represent a baby step toward an eventual approval of ETFs that buy the actual cryptocurrency, and that the GBTC discount might fully evaporate if the trust converts to an ETF.

“We see increasing pressure for the Securities and Exchange Commission to approve the GBTC ETF,” McGlone said in the market update shared with CoinDesk on Oct. 20. “Grayscale has said it’s committed to converting GBTC to an ETF. We see that as a matter of time, notably with a new digital divide opening vs. China, which may make Bitcoin and crypto success a vested interest of the U.S.”

However, analysts talking to CoinDesk last week said the price discrepancy will likely persist for the foreseeable future.

“Any announcements about purchasing GBTC on the open market, or signaling towards an ETF conversion, are just empty promises in an attempt to bring in arbitrageurs and likely will not have much impact,” Jeff Dorman, CIO at Arca Funds, told CoinDesk in an email. “I don’t think the discount will close any time soon and probably should widen.”

DCG, which also owns CoinDesk as an independent subsidiary, said it would authorize GBTC purchases of as much as $1 billion, up from a prior authorization of $750 million. As of Oct. 19, DCG had already purchased $388 million worth of shares, according to the press release dated Oct. 20. DCG declined to comment on the issue.

Grayscale allows investors to gain exposure to bitcoin through shares in the trust, which currently holds 647,540 BTC, according to bybt.com. That amounts to around 3% of the cryptocurrency’s circulating supply.

GBTC shares are derivatives of bitcoin and, in theory, should closely track the cryptocurrency’s price. So a substantial discount or premium is an opportunity for arbitrageurs – traders exploiting price discrepancies – to make money.

For example, with shares currently trading at a discount of 16% at press time, an arbitrageur expecting the price discrepancy to narrow would buy GBTC shares in the secondary market and simultaneously sell bitcoin in the spot market. The market-neutral position would yield 16% returns if shares in GBTC converge with the spot price. An arbitrageur can also hedge the long GBTC trade with a short position in the futures market, in which case, the return would be higher as futures usually trade at a premium to the spot price and converge with the spot price on expiry.

“The ability to buy GBTC and short futures and get exposure to bitcoin with about a 25% price advantage should continue to attract arbitrage, reduce volatility and narrow spreads,” Bloomberg’s McGlone said on Oct. 20, when the discount was over 20% and the six-month futures contract was drawing a premium of 4%. 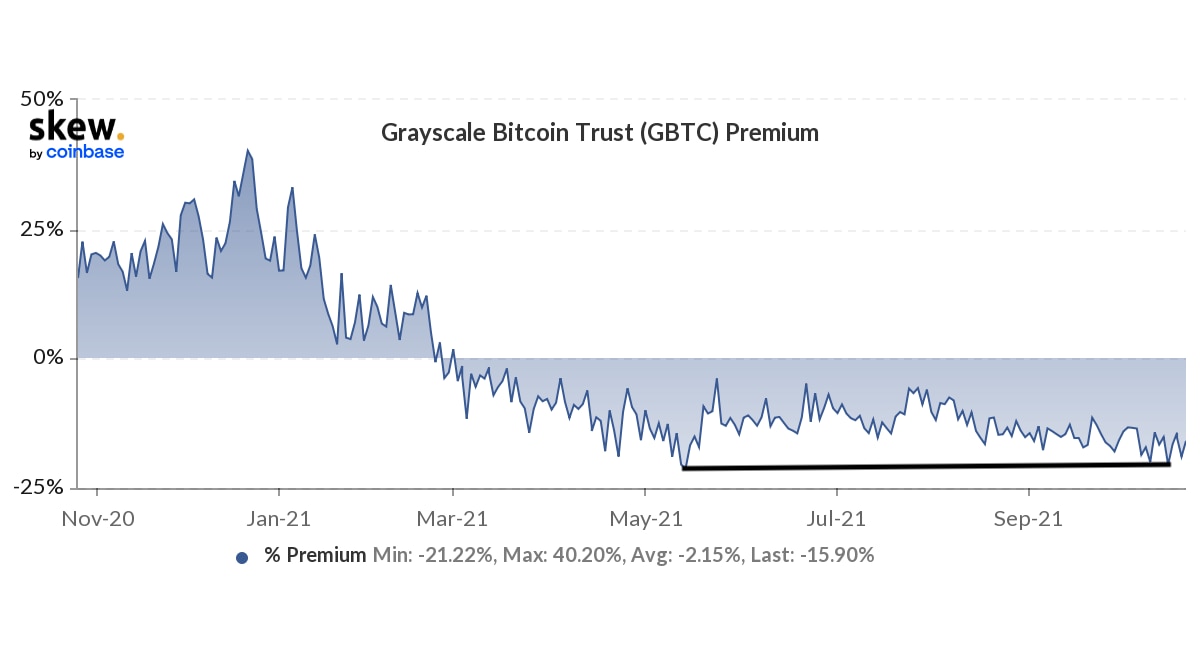 Grayscale Investments LLC recently filed the regulatory documents to convert the bitcoin trust into a spot-based ETF. A spot-based ETF would allow for more continual creation and redemption of new shares by market makers, so ostensibly it would track bitcoin’s price more closely than the current trust structure. Thus, it could be a big hit on Wall Street.

“The trust is desperate to return to par value, and I think they will need to in some manner,” Ben Lilly, a crypto economist at Jarvis Labs, said. “At a 17% discount, I find it attractive.”

According to Arca’s Dorman, traders may be less inclined to “arb away” the discount solely on the assumption that Grayscale’s plan to convert the trust into an ETF would win approval; that currently appears to be a low-probability event, in his view. Besides, traders can nearly earn double-digit returns via other strategies that appear relatively less risky.

Said Dorman: “Buying GBTC for that 17% discount is the equivalent of buying a 0% coupon, 2-year bond at 83 cents on the dollar (not including Grayscale’s 2% management fee, which makes it even less attractive to own). That is a 9.5% annual yield, roughly equivalent to what you can earn lending a stablecoin right now – the ‘risk-free rate’ in digital assets. As such, GBTC is not a very attractive instrument to own.”

The prospect of the SEC reversing its stance and approving Grayscale’s plan to convert into a spot-based ETF strikes some observers as unlikely in the near future.

“The idea of turning the trust into an ETF was to close the discount in the open market,” said Kevin Kang, founding principal of BKCoin Capital. “However, with the SEC chair only mentioning that he was comfortable with the futures-based ETFs, I am not sure when that will happen.”

Says Laurent Kssis, director of CEC Capital and former managing director of exchange-traded products (ETP) at 21Shares: “You just don’t shift a closed-end fund into an open-ended structure overnight in the U.S.”

“Just like with European crypto issuers, I see a new ETF program being filed (previously closed-end structure) and introduced, marking a new era for Grayscale,” Ksiss told CoinDesk in a Telegram chat.

Dorman said he was skeptical that Grayscale would willingly forgo its management fees from the Grayscale trust, estimated at $800 million a year.

“If they convert to an ETF, that guaranteed revenue goes away, and they immediately enter an oversaturated race where fees will trend towards 0%, and they will be competing against companies with bigger, better brands than themselves. That’s a formula for failure,” Dorman said. “They are better off being hated by their investors but generating perpetual fees. Why voluntarily destroy the greatest business model in history?”

According to an Oct. 20 Twitter thread by Messari’s Ryan Selkis, DCG’s plans to expand purchases is a “PR stunt to make unwitting investors think DCG can close” the GBTC discount, which is “impossible given the size of the trust.”

But he says it may be hard for Gensler, the SEC chair, to argue that preventing GBTC from converting to a spot ETF would fall under the rubric of “investor protection,” since it comes at “the expense of of shareholders,” Selkis wrote. If the trust were allowed to convert to an ETF, the fund’s shares would probably trade back close to the value of the underlying bitcoin. In other words, the so-called “Grayscale discount” would go away.

While in ETFs, specialized traders known as authorized participants create and redeem shares to keep their price in line with the net asset value; that process is not available with Grayscale’s Bitcoin Trust.

The vehicle can only create a basket of shares, offer liquidity under Rule 144 resales, and cannot provide a redemption program – meaning shares can only be created and not destroyed. (In 2016, the SEC slapped Grayscale for offering redemptions.)

For several years, Grayscale’s Bitcoin Trust was the only credible option for institutions to get exposure to bitcoin without buying the digital asset directly. That led to a steep premium on its shares in the secondary market. The persistent premium provided a strong incentive for accredited investors to buy GBTC at its net asset value by depositing bitcoin to capture the spread six months later. The premium reached as high as 40% in December last year.

According to the crypto derivatives research firm Skew, the premium was the function of “exposure to bitcoin in a regulated vehicle without having to deal with the challenges of custody, eligibility to some tax-efficient schemes, strong distribution through regular brokerage accounts, lack of alternatives such as an ETF.”

However, with the advent of the spot-based ETFs in Europe and Canada early this year, the demand for GBTC weakened, and the premium flipped to discount in the first quarter, killing the so-called Grayscale carry trade.

The number of options available to gain exposure to bitcoin has only increased with the launch of ProShares Bitcoin Strategy ETF and Valkyrie’s ETF last week. Both products invest in the CME-based bitcoin futures contracts in a bid to replicate the cryptocurrency’s performance.

“I don’t foresee any improvement in the performance levels of GBTC to its discounted rate as anticipated institutional-grade crypto products are coming to the market,” CEC Capital’s Kssis said.