Battle-based RPG game Mech Master will conduct a public sale of its native token ($MECH) via the Red Kite and GameFi Launchpads on October 24. The turn-based strategy game, which compels players to “build their own territory with future technologies and protect their homeland,” features inbuilt earning opportunities through staking, land sales, and its very own NFT marketplace.

A private sale will precede the public offering, with each private pool allocated $100,000 in tokens. The public sale, meanwhile, will have a hard cap of $70,000. The whitelist for both launchpads is still open, with the RedKite IDO price set at $0.03 and GameFi’s IGO (Initial Game Offering) price set at $0.04. Further details about the public and private pools can be found here, and the team has also compiled a whitelisting tutorial for those interested in participating.

The appearance of Mech Master on both launchpads reflects the broad appeal of the game. While Red Kite is a PolkaFoundry-powered platform backed by an extensive network of marketing partners and influencers, GameFi is the industry’s first dedicated IGO launchpad, an all-encompassing hub for the fast-growing game finance sector.

Mech Master aims to establish itself as an industry leader in play-to-earn (P2E) robot gaming, where players can earn revenue through both clever gameplay and tactical crypto trading. Announced to the world this past August, the immersive game’s plot is as old as time: collect giant fighting machines (known as “Mecha”) and futuristic weapons to save the world. OK, perhaps it owes much to the Transformers franchise of comics and movies – but Mech Master is very much rooted in the cryptosphere. That means 2D and 3D items with real-world value, the ability to rent and trade NFTs, and even earn rewards for winning battles and assembling the most badass Mecha.

An Augmented Reality (AR) demo version is even in the works, suggesting Mech Master may eventually constitute an immersive reality of its own. “Do you want to try to experience yourself standing on the battlefield of giants like in a sci-fi movie?” asks Project Manager Hikari Mai. “If the answer is yes, you cannot miss this feature.”

In truth, Mech Master seems tailored for the metaverse right out of the box. Not only are the visuals otherworldly (a prerequisite, it should be said, for a sci-fi game) but there is an enormous library of in-game collectibles that can be found, unlocked, bought, sold and won – everything from Mecha body parts, pilots and virtual land to equipment, lightsabers, energy cannons and vehicles. Naturally, the game’s pioneers will be hoping that as it attracts more players, such items will become highly valuable in the lucrative secondary market.

The game even has its own annual World Cup, wherein players can compete for a treasure chest of valuable prizes. Gamers can also build a moonbase land plot and create their own economy by constructing specialized facilities to be used by other players. Speaking of construction, it’s possible to build a special battlefield – then charge other players a fee for the privilege of going to war within. 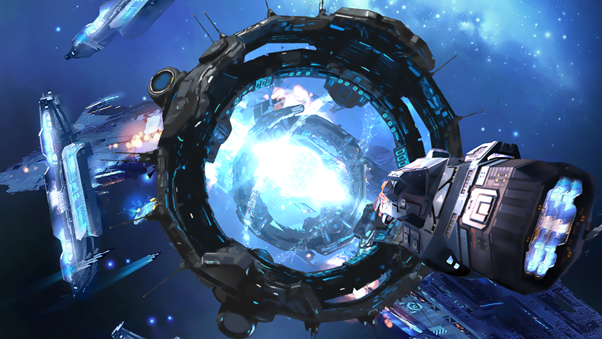 Created by a talented team of crypto, gaming and blockchain veterans, and backed by some of the biggest VC firms in the space (Icetea Labs, Magnus Capital, AU21, MiH Ventures), Mech Master is arriving at a time when NFTs and blockchain gaming are positively booming: not only has Hong Kong-based blockchain game developer Animoca Brands just achieved an eye-watering $2.2 billion valuation, but NFT sales in Q3 surged to $10.7 billion – an eightfold increase from the previous quarter.

While it’s anyone’s guess how the NFT/gamefi space evolves over the coming 12-18 months, the Mecha Master team has published an ambitious roadmap that takes it up to Q4 2022. By this time, the project will feature its own decentralized autonomous organization (DAO) and launch on other chains (Polkadot, Ethereum), opening it up to an even wider audience.

If the creators get their way, Mech Master will have a presence throughout the world, spreading through word of mouth among hardcore gamers and crypto evangelists. Despite being months away from a full launch, Mech Master communities are flourishing so much that a team of 15 are tasked with managing them.

For now though, all hands are to the wheel in preparation for this weekend’s token sales on Red Kite and GameFi. Is Mecha headed for the moon? Time will tell.